Stay Cool This Summer with Reliable Melbourne, FL ac repair near me

Is your home’s air conditioning system acting up? Has your business’ cooling system stopped working completely? Whatever your situation may be, rather than searching for “AC repair near me”, get in touch with the contractor that Brevard County trusts most: A-Best Air and Heat INC! As a premier Melbourne, FL AC repair company, we’ve been keeping the residential and commercial properties of Melbourne, FL cool and comfortable for more than 35 years! Our team of certified technicians will have your system back up and running in no time!

Whether it isn’t blowing cool air, there’s a refrigerant leak, the evaporator coil has malfunctioned; no matter the cause, when your central air conditioning system isn’t working, when you need fast, reliable, and affordable ac repair near me, contact the team at A-Best Air and Heat INC! 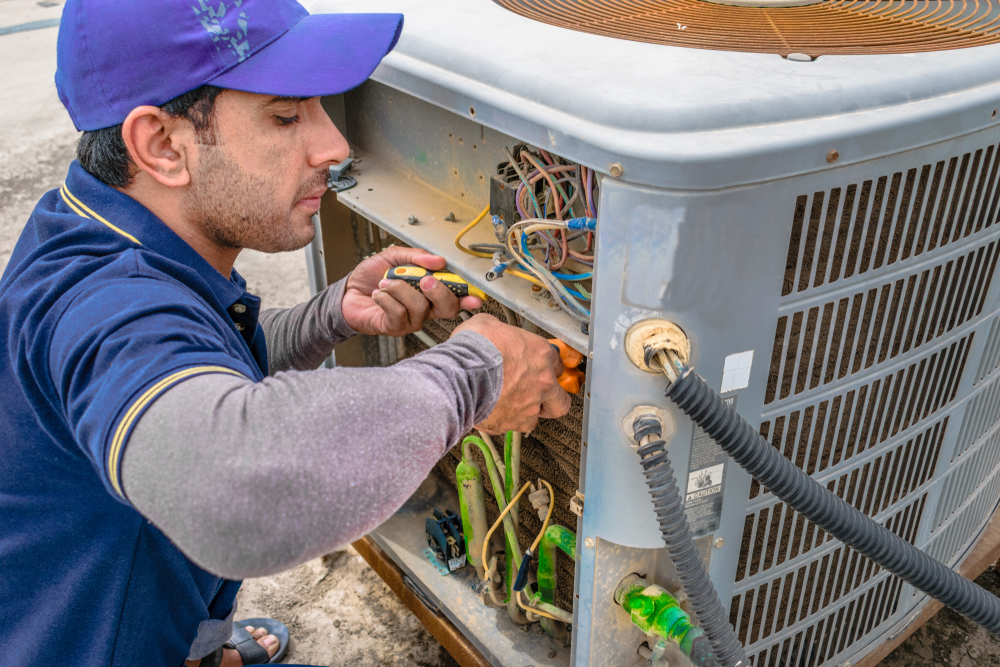 Signs You Need to Schedule an Appointment for ac repair near me in Melbourne, FL

When the weather forecast calls for a heatwave, you thank your lucky stars that you have an air conditioning system to keep you cool and comfortable. But what happens when your AC is making strange noises, the air flow isn’t as powerful as it usually is, it isn’t blowing cool air, or it stops working completely?

If you’re the DIY type, you might be thinking that you can tackle the problem yourself. While that’s certainly commendable, and sure, there are some AC maintenance and repairs that you can successfully handle on your own (like changing out the filters), when it comes to serious issues that require extensive repairs, leaving the job to the pros is a much better bet.

If you’re experiencing any of the following, forego the DIY approach and contact a Brevard County company that specializes in ac repair near me instead.

Little to No Cool Air

If you keep turning the temperature on the thermostat down but the temperature inside your Brevard County home or business keeps going up, you’re definitely going to want to call a Melbourne, FL AC repair contractor. There are several different things that could be wrong; the compressor may have failed, the refrigerant level could be low, or the evaporator coil could be damaged, for example. A reputable AC repair service will perform a comprehensive assessment to find the root cause of the problem and will make the necessary repairs.

How is the air flowing out of your vents? Does it seem to be weaker than usual? Is cool air coming out of some of the vents but not others?

A number of issues can impact an AC system’s air flow; a malfunctioning compressor or a clog in the air ducts are just two potential causes. When air flow is an issue, a call to a company that specializes in ac repair near me is warranted.

It’s not unusual for an air conditioner to create some degree of moisture, especially when it’s really hot and humid out, but it shouldn’t create a ton of it. If it seems like your Brevard County AC unit is producing a lot of moisture, that’s definitely a cause for concern and justifies an appointment with a Melbourne, FL AC repair technician.

A clog in the drain tube or a refrigerant leak are just two potential factors that could be contributing to the increased moisture output, and both problems should be addressed by a professional.

If you hear strange noises coming from the unit, that’s a warning sign that your air conditioning system isn’t functioning properly. Odd sounds could mean that a belt is damaged out of place or that the motor is on its last legs and is about to give out. If you’re hearing strange clunking, clanging, banging, whirring, or any other unusual sounds coming from your air conditioner, don’t ignore them; schedule an appointment with a company that specializes in ac repair near me!

If you’re experiencing one of the above-mentioned issues or you’re having any other problem with your air conditioning system, contact the pros at A-Best Air and Heat INC! Our full-service, fully licensed and insured Melbourne, FL AC repair company has been keeping the homes and businesses of Brevard County cool and comfortable for more than 35 years, and we would love to do the same for you! For more information or to schedule a consultation, call 321-725-8758 today!

Some information about Melbourne, FL

Melbourne is a city in Brevard County, Florida, United States. It is seventy-two miles southeast of Orlando. As of the 2010 census, there was a population of 76,068. The municipality is the second-largest in the county by both size and population. Melbourne is a principal city of the Palm Bay – Melbourne – Titusville, Florida Metropolitan Statistical Area. In 1969, the city was expanded by merging with nearby Eau Gallie.

Evidence for the presence of Paleo-Indians in the Melbourne area during the late Pleistocene epoch was uncovered during the 1920s. C. P. Singleton, a Harvard University zoologist, discovered the bones of a mammoth (Mammuthus columbi) on his property along Crane Creek, 1.5 miles (2.4 km) from Melbourne, and brought in Amherst College paleontologist Frederick B. Loomis to excavate the skeleton. Loomis found a second elephant, with a ‘large rough flint instrument’ among fragments of the elephant’s ribs. Loomis found in the same stratum mammoth, mastodon, horse, ground sloth, tapir, peccary, camel, and saber-tooth cat bones, all extinct in Florida since the end of the Pleistocene 10,000 years ago. At a nearby site a human rib and charcoal were found in association with Mylodon, Megalonyx, and Chlamytherium (ground sloth) teeth. A finely worked spear point found with these items may have been displaced from a later stratum. In 1925 attention shifted to the Melbourne golf course.

A crushed human skull with finger, arm, and leg bones was found in association with a horse tooth. A piece of ivory that appeared to have been modified by humans was found at the bottom of the stratum containing bones. Other finds included a spear point near a mastodon bone and a turtle-back scraper and blade found with bear, camel, mastodon, horse, and tapir bones. Similar human remains, Pleistocene animals and Paleo-Indian artifacts were found in Vero Beach, 30 miles (48 km) south of Melbourne, and similar Paleo-Indian artifacts were found at the Helen Blazes archaeological site, 10 miles (16 km) southwest of Melbourne.

Directions from Melbourne, FL to A-Best Air and Heat INC

Here are some HVAC-related links:

We guarantee that we will be on the job within 15 minutes of your scheduled appointment!